Simon the nova wakes up to the glass shattering in his living room. His parents are away at work. Looking around downstairs he finds glass on the inside of the living room picture window. He turns just in time to see Arcnesss standing in the threshold of the kitchen with a device that’s beeping.[Successful assess the situation. 1 question]

Twilight is running through the streets of the lost Midnight city. It’s dark, there is a crowd of red and black robed figures chasing him through the empty streets. He stops running and begins using the city it self to fight back against his pursuers. [A hit on assess the situation, 1 question]

The Wilson’s begin the morning at the Dunes golf course talking with Jax, three hours before his shift starts. They are letting him go because he’s a danger. They saw footage of him in the fight that terrorized their customers. [Jax rejects their influence] Jax struggles to find a way to prove he is not dangerous. When Agent Jones arrives and coaxes Jax into taking a ride with him.

Fei Lin gets a visit from his grandfather, Knight’s Claw, and gets lectured about being a saviour to the people and not a menace. Fei lin accepts this influence from his grandfather. Knight’s claw also directs Fei Lin to the Kauffman Building where he can find the Exarch. She can help them with this girl in a glass box mission.

Simon charges up [fails Burn] while Arcness taunts him. She’s going to turn him into her personal battery. Simon runs out the front door to take the fight away from the house, only to run smack into a transparent force field blocking his escape. Arcness howls with glee and her device emits a series of pulses. Simon shifts himself through the force field [Hits Move through] and pushes the just-got-here Jax back into the car he was exiting from. “Driver, Drive!”

Twilight easily dispatches the cultists except the most ornate one…the leader. He demands answers of the cult leader [Hit on Pierce the veil] only have the leader go limp like a held puppet. Aza Toth’s laughter can be heard throughout the city. “My kindred fragment, U. R. Magnificent! You fought well, fierce, l33t. Now finish this battle. KILLZ HIM.” Twilight declines. He realizes Aza Toth is testing him [1 question] Twilight demands Aza Toth release the city he stole from earth. Aza Toth agrees if Twilight should give himself over to Aza Toth, be his avatar on earth. [Second question] When Twilight declines again, Aza Toth firmly reminds Twilight “You are not human, normal. You are a creature of immense power, superior in every way to the earthlings. Own up to your possibilities.” Twilight fails to reject his makers influence. Twilight wakes safe in his sanctuary, where he went to bed.

After catching up and checking on the girl in the glass box. The Breakfast Club Heroe’s decide they will all go to see The Exarch at the Kauffman Building. The same building Jax and Twilight tagged (see origin). The building is managed by an AI and is fully autonomous from the moment a greeter hands you your guest tag. The building directs you to your appointments. Theirs is on the 66th floor of the building. Other than five very art-deco seating and odd assortment of items meticulously placed on the walls. The entire space is open, quiet and empty. Jax is pulled toward an elk horn that is on the wall [What’s most useful?] While twilight decides the most expedient way out will be the windows [Quickest exit?] Jax stays protectively near Twilight [who’s most in danger?] The Exarch is some hundred year old mystic…and they tagged her building. When she does appear. She begins to tear down Twilight and his connection to the entity called Aza Toth. [Fails to reject influence] Adults just ain’t feeling Twilight today! Jax speaks up in Twilight’s defense, only to be rejected by the Exarch and reminded of how they both tagged her building…like heroes do! She tells the Breakfast Club Heroes they will need to bring in the Fomorian. He can help them figure out what’s up with the girl in the glass box, but he may not come willingly under pressure. They ask for her help in saving Twilight from Aza Toth. [Hit on Pierce the veil] She has zero confidence they can do the tasks to save their friend. She has a test to prove otherwise…but do not tell Knight’s Claw.

Satisfied the Breakfast Club Heroes leave the Exarch and the Kauffman Building only to be toss about by a bolt of electricity! “Mr. Johnson! Glad I found you!” Arcness cackles, hovering above the heroes. Assembled, the team has fought Arcness before, but they are not of the same purpose Jax intends to get the people to safety, everyone else is following Fei Lin’s lead to take down Arcness. Simon destroys a sidewalk, water line and hydrant. Twilight makes the city street a giant elder maw with tentacles, a forty foot version of Jax trips and falls causing a car pileup and then Arcness, just before they take her down, blows out the power grid in a city block. Fei Lin is pissed. As is the Exarch and reminds them about her zero confidence in their abilities, while she repairs the damage done and demands Twilight return Arcness from his pocket dimension so she can face the legal system. He’s reluctant to do so, but gives.

When the BCH return to HQ they find the glass box open and the blue girl gone! 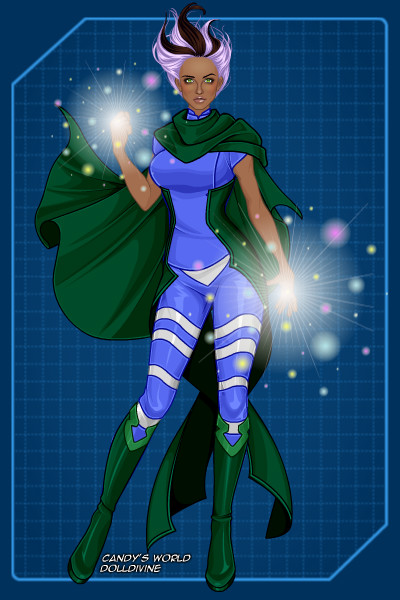 Drive: Make the BCH pay for getting in my way!
Abilities:Electricity control, Flight
Moves: Background: Arcness had her escape thwarted by the Breakfast Club Heroes first outing on
First appearance TBCH #1