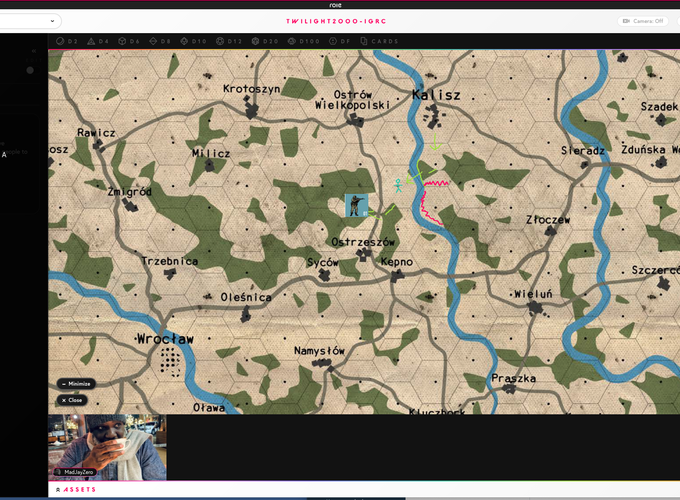 Three out of Kalisz

The squad heads south out of the fallen city of Kalisz early morning and we encounter a large forest fire, wildlife running from the burning brush. We head southwest to cross a river and encounter two Polish hunters carving up a deer or antelope kill, one of the men is coughing uncontrollably. We exchange meds for information and meat. The hunters are headed west to some sanctuary ran by a priest where peaceful people are welcomed. Good luck with that.

The day shift is spent heading further west. We are delayed a bit as a rag-tag group of a dozen or so civilians(?) head north by road on foot, past us hiding in the wood nearby. The squad does not engage this mob. Once they are gone we set up camp on the western side of the road, further in the wooded area.

As it becomes dark, a trio of soviet soldiers are patrolling the road area, one of them with an RPG-16 - they search the wooded areas by the road then return south by road on foot.

This was a solid session about figuring out the travel mini-game, like the Forbidden Lands RPG it is a puzzle you want to solve early while the GM is forgiving. There are four shifts in the day: morning, day, evening, night, IIRC. Your travel actions fill a shift and not all actions are compatible in a shift. You’ll need to find a shift to sleep, rest if you’re injured. Hunt, forage -don’t forget to keep watch! It’s a nice mini-game! I feel like we got the core mechanics down and the core travel mechanics locked in. Most of the skill tests were revolved around travel, scouting, and setting up (and hiding) camp. A couple of nice persuasion rolls during the conversation with the hunters! And plenty of character development as our players settle into the characters they’ve made. Free League is close to a beta release IIRC. Hopefully, we’ll have it before we play in a fortnight!

We used the Role app with some tech challenges at the start, mostly Chrome/browser permissions, etc. Once we got going it was solid. I like the default public access for images, dice rolls. Folks can grab tokens, draw on the map, etc w/o me having to run through and give permission. If it’s a table analogy..and it’s on the table - anyone can grab it is my preference. We used the simple notes play sheet in Role for this first session. I plan to make a play sheet for Twilight 2000. Dice rolls are nice, they show up on the table as well as chat. Nice dice options outside of a play sheet. It seems like players can have multiple play sheets going too which is also very nice!! Any of the assets or tokens are open for players to view, place, etc. It was a good experience. There’s stuff I don’t like, but Role is still in beta and the Role Slack is pretty good about what changes they’re working on.

Overall a nice tight session of play. A little over two hours with three players feels like the sweet spot of play.

‘Mad Jay’ Brown is a freelance game writer, professional GM-for-hire and TTRPG enthusiast! He is the host of the Diceology podcast and runs a West Marches online game at IntoTheMadLands